“There are moments when the heart is generous, and then it knows that for better or worse our lives are woven together here, one with one another and with the place and all the living things.”

Later this month an article I’ve written will appear in a women’s wellness journal. I feel like it’s a “coming out” of sorts, I admit to my “condition”–a pulmonary auto immune disorder–and how I work to accept and manage it.

It’s one of those “invisible” disabilities that people talk about. You wouldn’t notice it unless you were to walk up a flight of stairs with me or watch me climb a hill. Or if you knew me before–rushing through my eighteen-hour days–a fast walker and a fast talker. I’m still productive; I make sure of that, only different–almost embarrassing. On inclines I stop when I have to, winded. I take some deep breaths and keep going. Even though the effort cramps my calves and sucks the air right out of me. “It’s a metaphor,” I smile to myself. Mountains, hills, difficulties, complications. Or, “It’s not cancer, so stop whining.” I have one friend that I will take walks with, otherwise it’s just me and the dog.

The steep hill behind our house, the part we own, is about six acres. It used to be a young ladies’ equestrian school run by Jessie Fisk in the 1930s. Jessie climbed many hills in days before it was normal for a woman to accomplish what she had. A botanist, first female professor at a major eastern college, owner of one of the first cars in our village, a postmistress. And with her partner, Miss Butters, she ran an inn, a riding school, and a restaurant on our property. When we were running the inn, my mantra during hard times was, “WWJD”…What Would Jessie Do? She wouldn’t whine, that’s for sure.

During the Covid era I have grown to love our hill, part of the bubble that surrounds us, the trails into the woods that the horses used to trot, the bench at the top where I sit with the dog. Right now it is ablaze with color as I look out over the hills and the sliver of lake below. More precious for the effort it took to get there.

My Kundalini yoga teacher sends out invitations to her yoga hikes. Kundalini breath work has become integral to my disease management. I scan the invitations for hints, how steep is the hike, how strenuous the yoga, how hot will it be? My breathing is worse in the heat and humidity so I check my weather app.

I know I can’t sign up. I’d slow everyone else down. The anxiety alone would choke me.

So I roll up my yoga mat, stick dog treats in my pocket, and head up my own hill. As I lay out my mat, the dog fights to lie on it, delightedly confused. An old playlist on my iPhone starts out with Andra Day’s “Rise Up” and I just set in to do whatever comes to mind, finding that my Kundalini aerobic set works perfectly to “Life During Wartime.” I lay in Shavasana with the dog on top of me. We watch the clouds trace patterns across the bluest sky. Now October, the wind is crispening. For a moment I become a wonder-filled child with perfect lungs, making up stories in the shapes above, until the dog gets restless. I do a simple mountain pose and it’s time to descend.

I already wrote the rambling preamble for this hybrid piece which the Brevity blog so generously published. What I didn’t talk about, for the sake of brevity, is finding small islands of sanity in these times of grave darkness. At least for many of us, the current political climate stains us even as we work hard to keep our own hearts and minds above the murky water line. For me, I can find some peace–at times–cutting paper with tiny scissors, holding a yoga pose or chanting in my Kundalini class, or writing the perfect sentence. Sometimes contentment finds me as I listen to a patient make sense of their own pain or tell me that a medication is working and they feel, at least in a tiny way, that their life is back on track. Sometimes at 4 AM, that crazy witching hour, my little, once feral cat sits on my chest and purrs me back to sleep.

Whatever that is for you, I hope you find it tenfold in this season of darkness to light. Happy holiday, whichever one you choose. 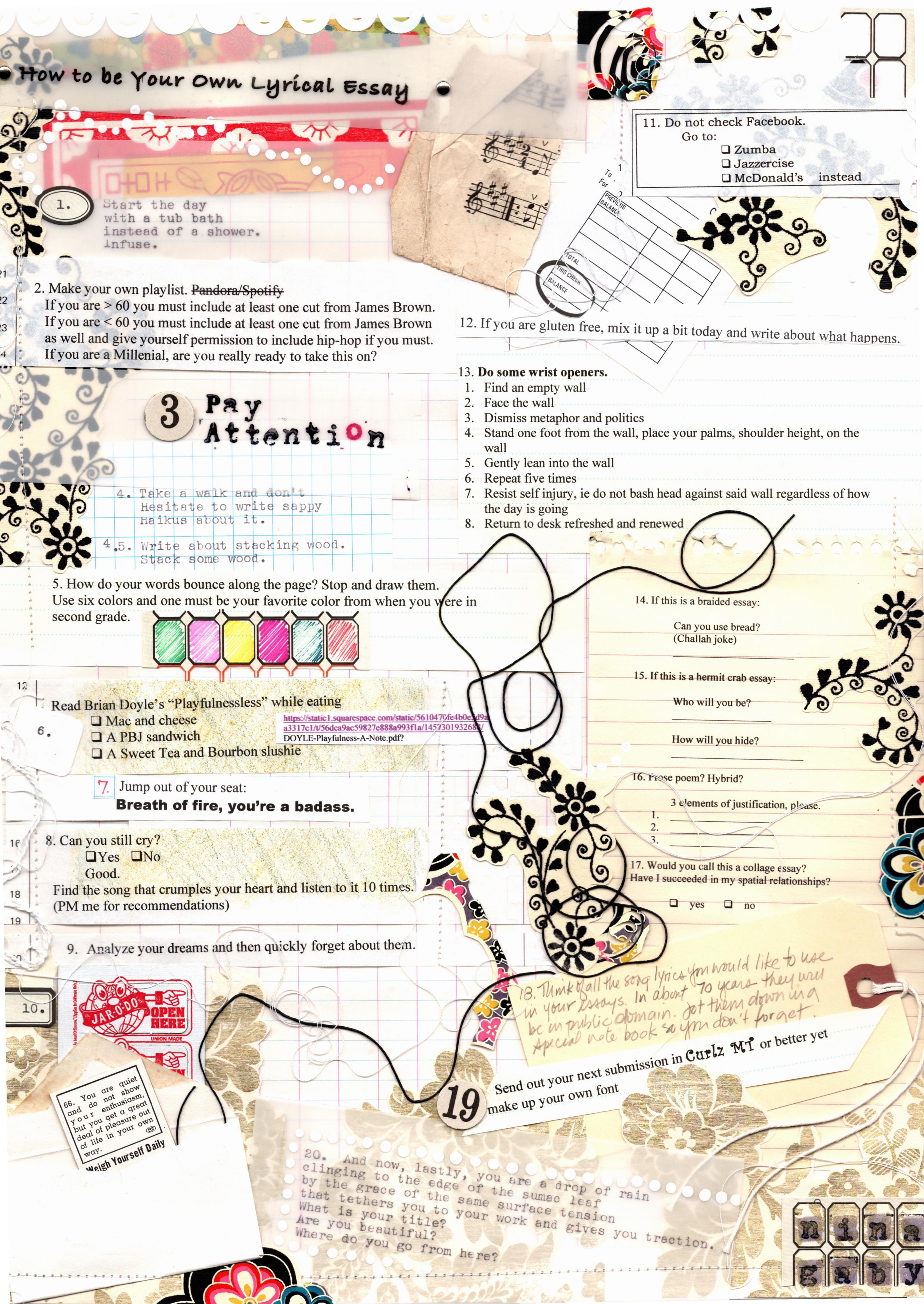 “We chose a sunny Sunday. She was about four or five. We bought bunches of daisies for the graves of our family members and and a big cherry pie for later from the farm stand across the road. As we drove around the park with the saleswoman, looking for the four plots we were planning to pre-buy, I asked the saleswoman to stop the car in the section we were considering. I got out, much as one might do when looking at real estate, and lay down in the grass under the tree at the head of one of the plots.”

Nina Gaby, “On Mentioning that our Daughter Wants to be a Mortician” from What Remains,the many ways we say goodbye (Ed: Sandi Gelles-Cole and Kenneth Salzmann, 2019, Gelles-Cole Literary Enterprises) 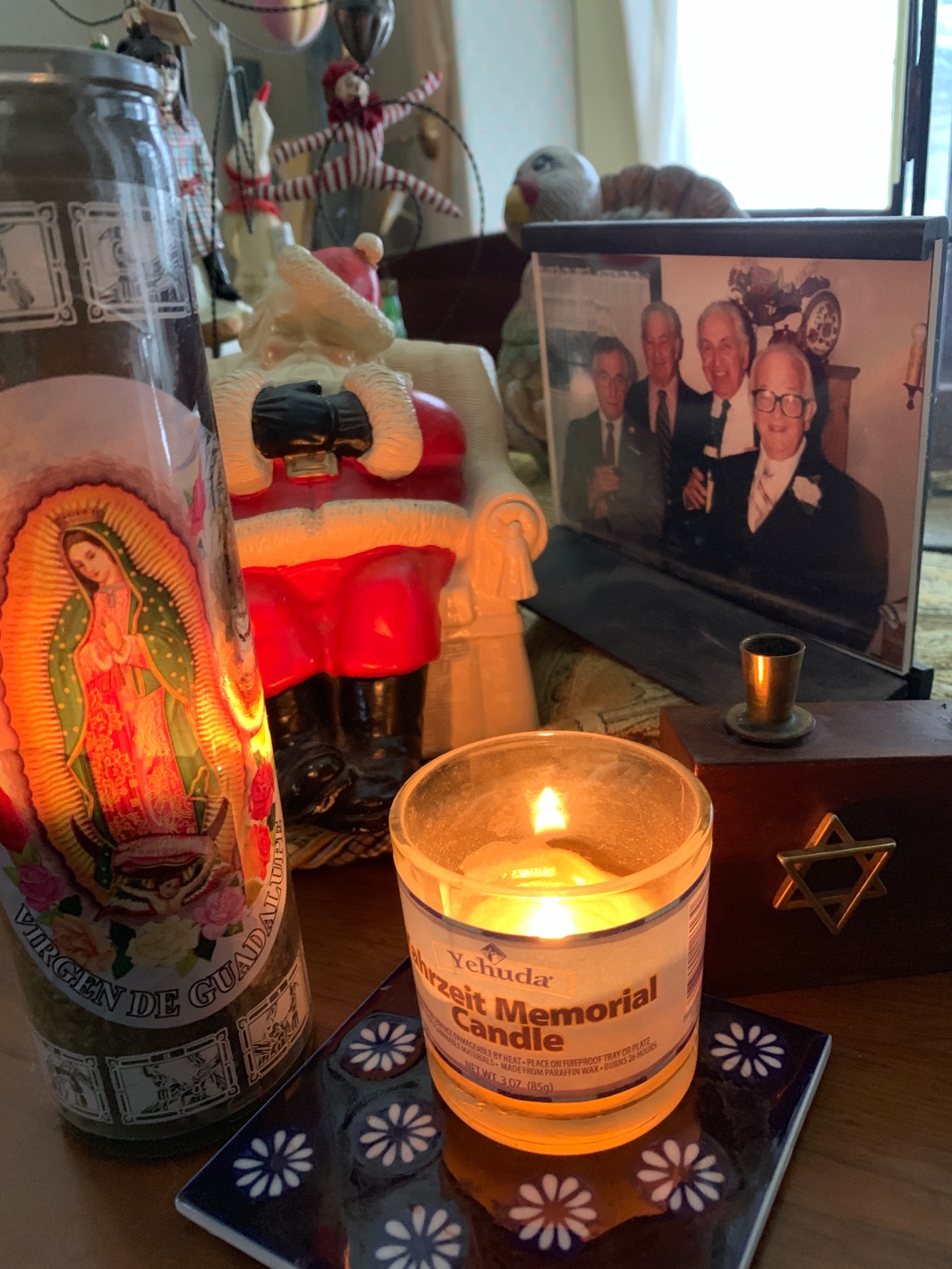 In the periphery of my consciousness is the date, December 6, 2019, and that it’s the anniversary of my father’s death in 1989. Brought even closer to home by my Facebook memory page which pops up with a photo of Mexican candles and my parent’s old Danish Modern mid-century menorah, the one I always hated as a child for it’s lack of traditional design, in which I mention my father’s passing. Ahh, I say to myself as I move on with my morning.

I sit down with a cup of coffee and share some emails with a dear old friend from high school who is trudging through her first holiday season without her husband. This is a phenomenon I know I will be experiencing more and more as I look towards my 70thbirthday. Who will be next has become a daily question. After the emails I visit my favorite literary site, the Brevity blog, to read today’s selection which is all about writing memoir after people have died. Clearly a theme for the day has emerged. Then I post on my Central Vermont Writer page about our upcoming planning meeting next week and use a photo of my father’s old Underwood typewriter in the post. OK. It’s starting to snow and the dog is pestering me to go out and play but my phone is buzzing.

My precious daughter texts from her office and we volley back and forth as I try to provide support for a work related decision she has had to make and the ramifications thereof. It’s snowing harder outside and I start to feel a familiar feeling that I can’t yet place. I am feeling so glad that I am home today and I can be at the other end of these emails and texts. And then of course it hits. Just before my father died, on a snowy winter day, I was a new therapist sitting in my new office, having just realized that the system I was working for–and health care in general–was a sea of shark infested waters, that maybe I had made a huge mistake, and in the midst of a panic attack I called my father. Now retired, infirm, sitting in his recliner watching the snow from his own window, he spent time reassuring me that I was fine. That systems suck. That I was above all the crap that was going on, and then he told me…. “You always have us.” Of course, I didn’t, at least not at the end of the phone line. He had not always been that supportive, but he had mellowed into a wise old man, not much older than I am now, and very much like how I am trying to be for my own daughter. The dog looks on in horror as I sob into the sleeve of my hoodie instead of taking him out for a frolic.

Shortly after that phone call with my father, maybe a week or two, on an equally snowy night, he died suddenly, his generous and crazy heart exploding while he watched Wheel of Fortune and now every year as winter approaches, I get a tic either in my left thumb or my right eye. It’s already been and gone this year so I figured we were pretty much done with the grieving.  Although I know better. Grief has it’s own shape and takes it’s own time. And when it surprises us it’s like we have that person back, even for a moment or two.

Anyway, here’s to all of us who have had losses near and far, old and new. Take your time, be kind to yourselves. 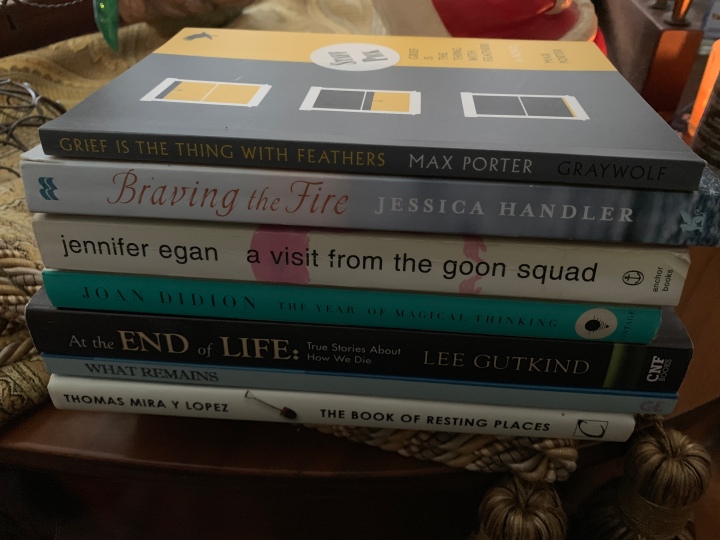 Some great books on grief and writing about it…….